Kilnbridge were engaged by Canary Wharf Contractors Ltd in October 2019 to construct a pair of floating concrete structures connected by a series of bridges, boardwalks and pontoons to create a new bustling restaurant destination in the Wood Wharf district.

In this past week, the Kilnbridge team has completed the first stage of this remarkable feat of engineering, as the team mobilised the two 1050T concrete hulls from their dockside construction site into the adjacent water in King George V Dock. The challenges and risk of this project were enormous, but the team’s expertise in complex engineering and risk management shone through.

Each of the 1020T hulls measured 38m x 16.6m and was formed of a base slab with a heavily reinforced internal grid of upstands and perimeter ring beam.

All of the perimeter concrete was formed with Xypex waterproof concrete with hydrophilic strip installed at all construction joints. Xypex inspections were successfully undertaken and signed off remotely using video conferencing technology implemented due to Covid-19 travel restrictions.

This time-lapse footage captures how the concrete hulls were constructed over 16 weeks. Please note, the majority of footage recorded was before the COVID-19 lockdown

Once the slab and perimeter ring beams had been poured, the 4.5m high perimeter walls were cast with DOKA Alu-Framax shutters in twelve separate pours optimised to minimise subsequent shrinkage cracks. In addition to these walls, there was an internal cross-wall which formed a bulkhead accessed with a post-fixed watertight marine door installed within the bulkhead wall, internal columns, and also a lift shaft. The lift shaft would form a service shaft between the hull base slab and the water level slab.

Finishing off each of the hulls is a water level perimeter slab forming a doughnut around the perimeter walls. Each of the concrete elements had a number of cast-in fixings such as anchor bolts, plates and channels to facilitate subsequent connection to follow-on trades including structural steelwork, façade, and timber decking contractors.

How did the team transport the hulls?

A semi-submersible barge capable of holding an impressive 8000T was brought in from Norway and docked at King George V (KGV) Lock, London. The barge was then fitted out over the course of three days through the welding of steel stools onto the barge’s deck.

As the barge was being prepared, the team brought in SPMT (self-propelled modular transporter) units, and a total of four 12-axle SPMT units were assembled on site. The SPMTs were driven under the first hull on pre-prepared level concrete strips. Subcontractor Mammoet undertook the complex mobilisation with a team of six.

The first hull was then jacked up clear of the supporting formwork and reversed backwards away from the dockside. Meanwhile, the barge was towed from the KGV Lock to site and moored immediately adjacent to the two hulls – ready for loading.

Linkspan bridges and wedges were lifted into position at the dockside, so as to create a bridge from the barge to the SPMT concrete strip. Once in place, the SPMTs slowly drove onto the barge loaded with the hull. As the combined weight of the SPMTs and hull transferred onto the barge, the complex buoyancy of the barge was adjusted to compensate for the load transfer. Once in the position, the hull was lowered onto the steel stools welded onto the barge deck and the SPMTs were driven back off the barge. This was then repeated with the second hull.

Once the second hull had been loaded, the SPMTs were driven off the barge and dismantled, loading back onto transports for removal from site.

The barge was then towed from the site dockside into the KGV lock. The water level in the lock was lowered until the stern of the barge sat on the silt at the bottom of the lock. Once stable, the water level was raised at the same time as the barge buoyancy tanks being flooded such that the barge remained seated on the dock bed as the depth of water in the lock increased.

The hulls floated free of the barge and when the water levels in the lock and dock were equalised, were then towed back to the site dockside to be moored up ready for the superstructure to be installed. 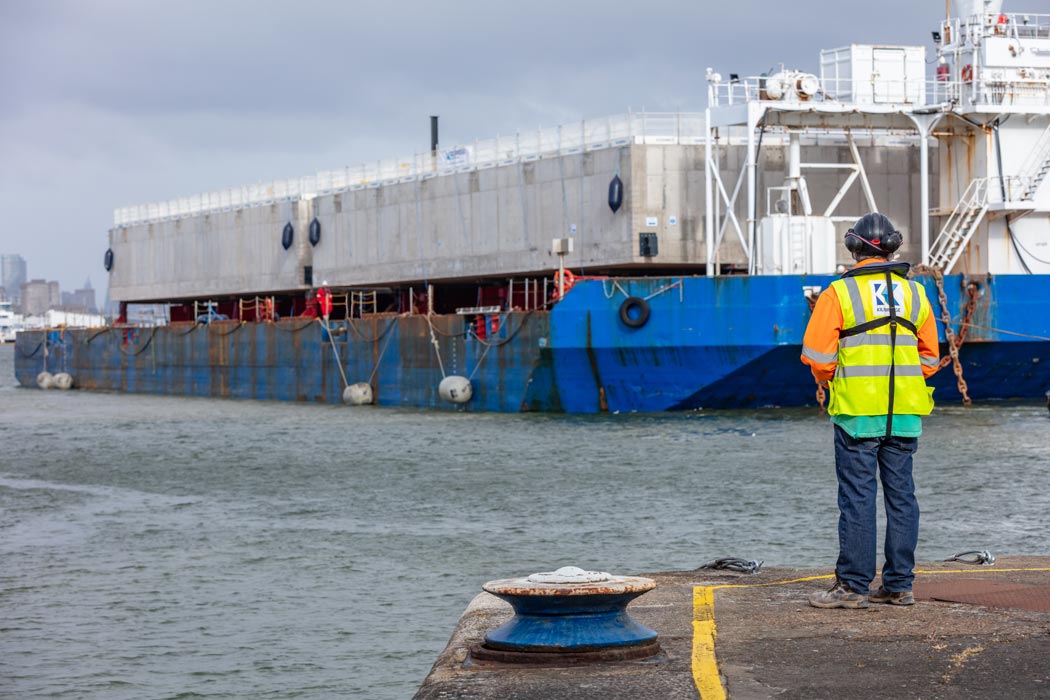 The hulls will be towed to Wood Wharf in Canary Wharf in either December 2020 or January 2021, at which point Kilnbridge will install pontoons, connecting struts, and walkways fixing them in their permanent mooring positions.

For the latest updates on this project, please follow us on;